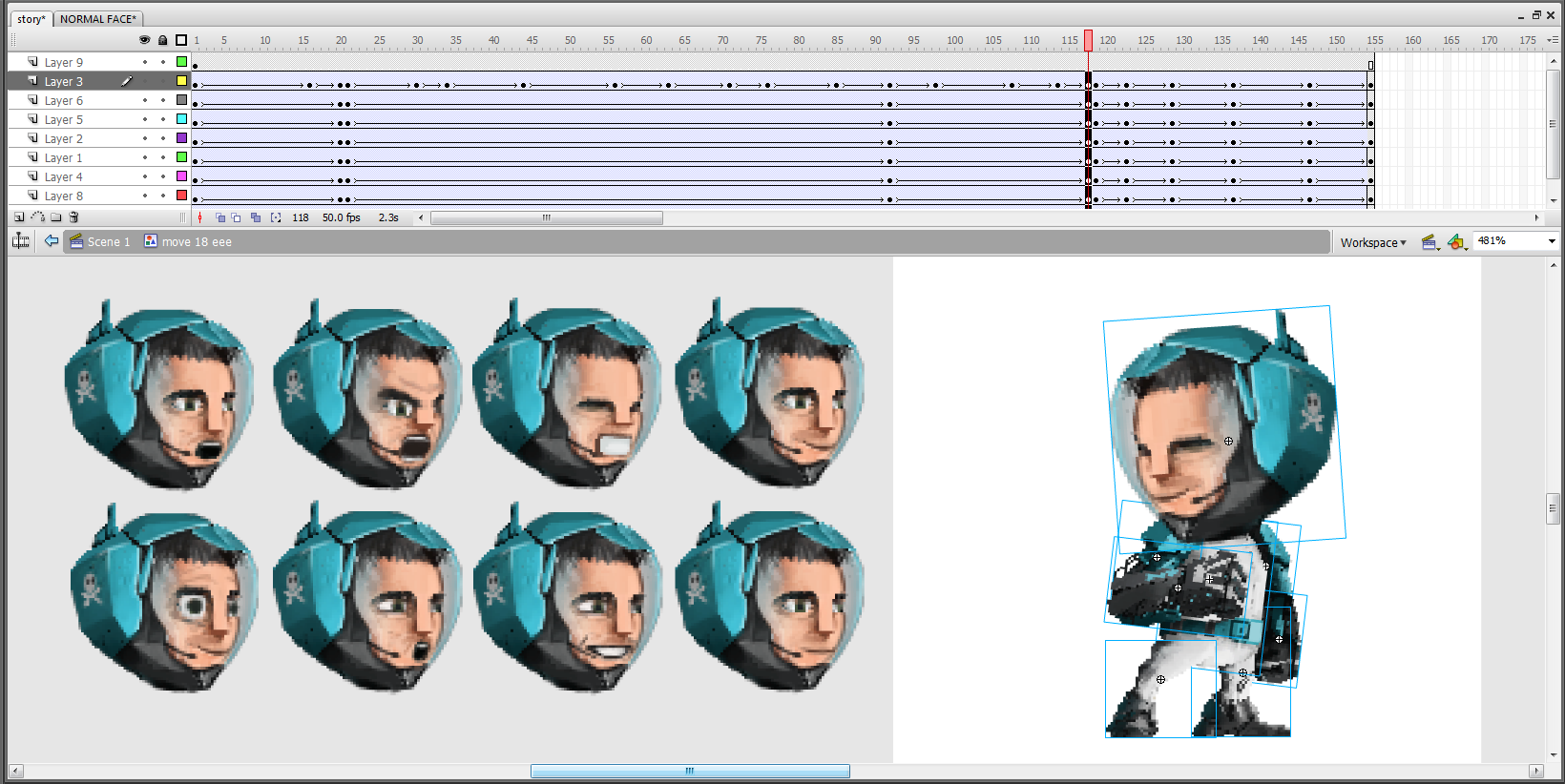 Eight characters, one crazy computer, 50 frames per second, and the whole work being - so far - about 20 000 picture frames included in the game. It’s because we have a good eye for details. It’s not just about doing jumping character animation. 3 phases of the jump that follow one right after another have to be done. So what if they only take a fragment of a second? Details make entirety, and the player’s eye is the strictest judge.

Today’s blog update was brought to you by Bohumil Sodoma, our Blackhole characters animator.

The characters in the game are animated differently than background animations. Seeker (the programmer), is a multi-talented guy and he makes animations of environments coding called scripting, and that right in the engine of the game. Thanks to that, the ambient is full of life and it all looks really wonderful.

Characters, on the other hand, are mine to animate. I do that in animation software, and export each one as a .png file. Then I send them to Seeker, and he puts them in the game one after another.

My work, however, starts elsewhere; in a graphic software where I first need to put the characters together. I base them on the artworks of Radomír Markovič, and adjust their size as needed. I cut the character into different parts (head, torso, arms, legs) so the character doesn’t look stiff, I edit them graphically so it looks cool, and if the character is supposed to use something during the game; I of course draw whatever it is the character needs.

However, it’s not only that the character can’t look stiff; it can’t be a zombie either. It’s necessary to create facial expressions (grimaces).  I do that by drawing, for example, 10 differently looking faces and then I insert them into animation as needed. This is what it looks like: Now the time to make the characters move comes. Each one of them can stand – breathe, run, make some action (press a button), jump, climb a rock, fall, swim, be bored (if it stays in one place for too long) and do some special story actions. Most of that is in a situation where the characters also speak, and the text is put right in through dubbing.

Each one of the 8 characters does that differently and looks differently while doing it. Every character has a different body type, as I especially wanted to make them look diverse. The Captain must look stern, Selassie funny and Smusa scared.

A whole different story is Auriel. Basically, her face is created in Red Dwarf Holly’s style. I have to say, Auriel is equally freaky. She was a new situation for me, because I had to animate a portrait. It must appear authentic and nice to look at. The interesting thing was creating now more detailed 6 different expressions: neutral, happy, angry, frightened, ironic and sad. Here’s a little illustration: The behind-the-scene comes to an end…

Part of my job is also a permanent communication with team, voice-conferences, approval, redoing, editing of older things and so on. Despite the game being a part-time job, I’ve spent about 200 hours on it. Personally I’m looking forward to see the story part of the game the most, and also can’t wait for the hard-core platformer, which really missing on the market. I really enjoy the working on the game, it’s for me a huge experience for me.

I truly believe you’ll enjoy many hours of fun.